I am really troubled these days about how people are walking around like mindless zombies and unaware about what is really happening around our planet... Or in most cases, just do not give a damn!  It is especially shocking when I try to explain to people exactly what that fraud "ISIS" is really all about... In most cases, I get a wild eyed stare, or in some cases many just say "I don't want to hear it!"... I am at a loss at how dumbed down most people are and how they will do nothing to stop what the criminal Jewish elite have planned for all of us....

Yes, Most Canadians are truly gullible and oblivious to what is really going on in the world.. But this is nothing compared to what I have discovered about how truly gullible most Americans are... Especially when it comes to the absolute subservience of their criminal government to the psychotic state of Israel.... But it has caused me to wonder exactly what most Israelis themselves actually think of their American slaves and the so called "special relationship" that has allowed that criminal state to exist now for almost 67 years?.. The following information definitely answers that important question, and the findings are truly interesting and quite astounding....

I want to share in this report a most interesting article that comes from John Friend's site: The Realist Report, at www.therealistreport.com...It is entitled: "Israelis Agree: Americans Are Mindless Dupes" and gives a real portrayal of exactly what those psychopaths in Israel really think of the American people, their supposed "benefactors" and "greatest allies".....I have that article from the Realist Report right here for everyone to see for themselves, and the findings will indeed shock you... I have my own thoughts and comments to follow:

A recent article appearing in The Jewish Daily Forward offered some revealing insights into what "America's greatest ally" in the Middle East, the Jewish state of Israel, and her people think about the nature of America and the American people.

The majority of Israelis, despite being a "famously fractious" people, tend to agree on one thing: Americans are gullible dupes. According to the article, Israelis disdain Americans, view us with contempt, and think we are idiotic, mindless dupes who will blindly accept and believe anything the Jews say (a view that is largely correct, unfortunately). The article begins: 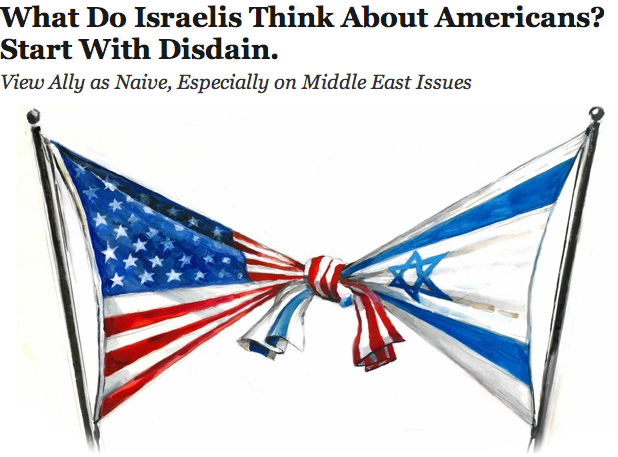 Though Israel is a famously fractious society, Israelis tend to agree on one thing: Their strongest supporters are an inherently dupable people.
“Most Israelis think Americans are pro-Israel and we can sell them anything, especially mud from the Dead Sea,” said David Lifshitz, the lead writer for the Israeli comedy show “Eretz Nehederet,” or “Wonderful Land.”

“Or — just regular mud with a ‘Dead Sea’ sticker on it.”
But it’s not just American tourists whom many Israelis see as guileless. American foreign policy is held up to similar scrutiny here, even as Israel receives billions of dollars in foreign aid from the United States each year.
“Americans are perceived to be naive, especially when it comes to the Middle East,” said Uri Dromi, who served as a spokesman for the Yitzhak Rabin and Shimon Peres governments. “It is a bad neighborhood and it seems like they just don’t realize it.”
The naivete Israelis perceive in Americans is not just something they believe only Israel’s adversaries exploit; Israelis believe they can do so, too — and do. In a secretly recorded video of a 2001 discussion with a group of terror victims in the Ofra settlement in the Israeli occupied West Bank, now-Prime Minister Benjamin Netanyahu laid out this widely held perception.
“I know what America is,” Netanyahu, then on political hiatus after an election defeat, told the settlers when one asked whether his proposal for a “large scale” attack on the Palestinians would be met with global condemnation. “America is a thing that can be easily moved, moved in the right direction. They will not bother us… Let’s suppose they [the Bush administration] will say something. So they say it — so what? Eighty per cent of the Americans support us. It’s absurd! We have such [great] support there! And we say… what shall we do with this [support]?” [...]

So there you have it folks. The American political establishment and a huge percentage of the American populace literally worship Israel and the Jews. For decades now, America has provided Israel with essentially unwavering political, diplomatic, economic, and military support, to the tune of billions of dollars per year and at a cost to America's reputation and standing in the world, despite the fact that the Jewish state has militarily attacked America on multiple occasions (9/11 and the attack on the USS Liberty come to mind) and has engaged in widespread espionage, subversion, and treachery against the United States.

And how do the Israelis view Americans for their blind support of the Jewish state? With utter contempt and disdain, which they have no problem proudly and openly stating and publishing in their own newspapers.

I'm reminded of the now deceased former Israeli Prime Minister and international war criminal Ariel Sharon's statement to Shimon Peres in October 2001, shortly after the Israeli/neocon organized and executed false flag attack on 9/11, in which he boldly proclaimed, "I want to tell you something very clear, don’t worry about American pressure on Israel. We, the Jewish people, control America, and the Americans know it."

The Jewish death grip on America is so secure, they can openly admit and boast about it, and then state right to our faces that we are gullible idiots who will accept or buy anything the Jews wish to sell them, "especially mud from the Dead Sea," as the Jew David Lifshitz stated in the article above. "Or — just regular mud with a ‘Dead Sea’ sticker on it."

America, it is time to wake up. We are being degraded and insulted, used and abused on a daily basis, and most of us simply refuse to recognize it. It is simply unacceptable.

In many conversations with my good friend, Whitewraithe, who of course hails from Tennessee, right in the heart of America, she has reiterated to me many times about how the people around her are constantly harping about how "great Israel is" and how "America should support "God's chosen"..."  To me, and her, this is so disgusting, and shows how stupid most Americans are truly are and how the criminal Israelis cannot help themselves but to laugh and take full advantage of these brainwashed fools.....

Yes, most if not all Israelis are absolutely laughing at the gullibility of most Americans, and absolutely love the fact that they totally control the United States and its entire foreign policies.... They also love the fact that the gullible and stupid American leadership in Washington, DC, just hands over money to them with no questions asked.. Pathetic is an understatement....

This should be another wake up call for everyone, and especially the sheep living in the United States... Israel has been behind almost ALL the so called "terrorism" that we see on the planet today and has definitely attacked their "greatest ally" the United States several times in its sordid history... (The USS Liberty attack definitely comes to mind).... Americans must end their fraud "special relationship" with these criminals immediately and cut all ties with that psychotic state....

NTS
Posted by Northerntruthseeker at 2:59 PM

This tends to show why they are able to treat the goyim as 'cattle'.

The funniest Netanyahu cartoon since his U.N. fail, from an article at sputniknews.com titled Netanyahu's One-Track Mind.

The "general population" are moral cowards and would prefer to willfully remain mentally ill and ignorant than deal with reality, because they would then have to start MAKING DECISIONS for the first time in their life.

I have made studying this globalist atrocity my sole priority for the last 5 years.

1. People want to be sane. They do not. They want to be comfortable, which means not facing any facts that will force them to make uncomfortable decisions.

2. Facts matter. They don't. Believing that stating facts will have any impact on someone who doesn't want to be sane will drive you crazy. They will simply turn on you, because they do not have what it takes to turn on the people that have duped and abused them their whole life.

We live in a morally bankrupt and psychologically conquered society that is doomed and has been rotting for quite some time.

When you get down to it the simple fact is most people are completely devoid of individuality and would prefer to guarantee their own doom by pretending that telling themselves that tolerating anything and everything the globalist terrorists do to them will somehow prevent things from "getting worse", when in reality they guarantee things will continue to only get worse and worse because they refuse to face and deal with it.

These are the idiots you will hear talking about whatever the media tells them to believe in, who will not be able to reach a logical conclusion on their own at all -ie Israel's genocide of Palestinians is disgustingly criminal.

Because the scum criminal traitor media that has always lied to them has not told them to feel that way they can't.

If the media whores told them to feel that way that very day they would be babbling about "how awful it is" as if they are a decent person who cared.

Because the whore media never will, they never will feel that way, and are so mentally ill they are programmed to think there is something wrong with you for being sane, unlike them.