I came across the reports over the weekend that vindicates everything that I and others have been stating for years.... These reports state unequivocally that Global Warming is indeed a fraud, and that all data pushed forward claiming that temperatures have been "rising" around the planet due to this fraud "Global Warming" have been purposely falsified!  I am not shocked at all by these findings, and it shows indeed that what we are dealing with here is a scam just to fleece everyone for more "taxes".....

I want to present the following very important article that follows up all the reports about data being falsified to show the planet has been "warming"... It comes from the Orrazz.Com website, at www.orrazz.com, and is entitled: "Global Temperature Data Falsified For Years To Show "Warming" - Cartoon Reveals WHY" and is definitely a must read by everyone, and especially those out there that still think that "Global Warming" is somehow real... The cartoon alone speaks loudly as to why we have all been lied to so badly.... I have that article here, and of course my own thoughts and comments to follow: 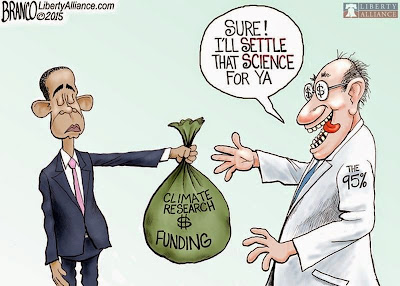 When future generations look back on the global-warming scare of the past 30 years, nothing will shock them more than the extent to which the official temperature records – on which the entire panic ultimately rested – were systematically “adjusted” to show the Earth as having warmed much more than the actual data justified.
Two weeks ago, under the headline “How we are being tricked by flawed data on global warming”, I wrote about Paul Homewood, who, on his Notalotofpeopleknowthat blog, had checked the published temperature graphs for three weather stations in Paraguay against the temperatures that had originally been recorded. In each instance, the actual trend of 60 years of data had been dramatically reversed, so that a cooling trend was changed to one that showed a marked warming.
This was only the latest of many examples of a practice long recognised by expert observers around the world – one that raises an ever larger question mark over the entire official surface-temperature record.
Following my last article, Homewood checked a swathe of other South American weather stations around the original three. In each case he found the same suspicious one-way “adjustments”. First these were made by the US government’s Global Historical Climate Network (GHCN). They were then amplified by two of the main official surface records, the Goddard Institute for Space Studies (Giss) and the National Climate Data Center (NCDC), which use the warming trends to estimate temperatures across the vast regions of the Earth where no measurements are taken. Yet these are the very records on which scientists and politicians rely for their belief in “global warming”.
Homewood has now turned his attention to the weather stations across much of the Arctic, between Canada (51 degrees W) and the heart of Siberia (87 degrees E). Again, in nearly every case, the same one-way adjustments have been made, to show warming up to 1 degree C or more higher than was indicated by the data that was actually recorded. This has surprised no one more than Traust Jonsson, who was long in charge of climate research for the Iceland met office (and with whom Homewood has been in touch). Jonsson was amazed to see how the new version completely “disappears” Iceland’s “sea ice years” around 1970, when a period of extreme cooling almost devastated his country’s economy.
One of the first examples of these “adjustments” was exposed in 2007 by the statistician Steve McIntyre, when he discovered a paper published in 1987 by James Hansen, the scientist (later turned fanatical climate activist) who for many years ran Giss. Hansen’s original graph showed temperatures in the Arctic as having been much higher around 1940 than at any time since. But as Homewood reveals in his blog post, “Temperature adjustments transform Arctic history”, Giss has turned this upside down. Arctic temperatures from that time have been lowered so much that that they are now dwarfed by those of the past 20 years.
Homewood’s interest in the Arctic is partly because the “vanishing” of its polar ice (and the polar bears) has become such a poster-child for those trying to persuade us that we are threatened by runaway warming. But he chose that particular stretch of the Arctic because it is where ice is affected by warmer water brought in by cyclical shifts in a major Atlantic current – this last peaked at just the time 75 years ago when Arctic ice retreated even further than it has done recently. The ice-melt is not caused by rising global temperatures at all.


NTS Notes: Yes, the cartoon says it all... And it shows exactly what has been happening with the US scientists that are still backing the fraud Global Warming scam today.. Most are indeed paid off by the criminals in the US Government who want this fraud Global Warming to be pushed as hard as possible on the American people so that they will be gullible enough to accept "Carbon Taxation" which will indeed be introduced very soon.... People need the truth and to not be fooled...

I have put out countless articles showing the truth that this planet is absolutely not warming at all, but is indeed entering a long cooling period that will indeed be almost a repeat of the "Maunder Minimum" that this planet endured several centuries back... The problem is that a lot of countries have now bought into the Global Warming fraud, and will be ill-prepared for this cooling!

Let us all put this Global Warming fraud out of its misery once and for all time.... The scam artists that are behind this swindle were in it to make out like thieves and they should all be exposed for their criminality!

NTS
Posted by Northerntruthseeker at 1:26 PM

Greetings from Kuala Lumpur. So glad to see you back in your stride, and fighting the good fight.

Here's a juicy one for you. Time to take this motherf*cker apart before he tears Canada apart.

It is trivially easy for anyone with access to existing CO2 and temperature measurement data-sets to falsify the statement that CO2 (at any level that ever existed) causes significant warming.

If CO2 is a forcing, a scale factor times average CO2 level times the duration divided by the effective thermal capacitance (consistent units) equals the temperature change of the duration. Thus the temperature responds gradually to a forcing. During previous glaciations and interglacials (as so dramatically displayed in An Inconvenient Truth) CO2 and temperature went up and down nearly together. This is impossible if CO2 is a significant forcing so this actually proves CO2 CHANGE DOES NOT CAUSE SIGNIFICANT CLIMATE CHANGE.

Dan... It is even worse than you could imagine, if you consider that CO2 itself is absolutely positively NOT a so called 'greenhouse gas' at all....

CO2 is actually molecularly a coolant...

NTS,
Although I could rationalize that more CO2 molecules at TOA might increase thermal radiation from the planet and thus help cool it, the analysis at http://agwunveiled.blogspot.com didn't show any significant effect either way for CO2. This corroborates the assessment in my first post.

The absorption 'opportunities' for water vapor out number those for a 100 ppmv increase in CO2 by about 60,000 to one.

Well its quite obvious when you look at it this way. Carbon is the source of life for all living things. Jews want to get rid of Carbon.

If you do look at CO2 as a "green house gas" then you are looking at the propaganda that they are trying to push to implement their "carbon taxation"...

The fact is that the criminals behind the global warming bullshit figures have been trying desperately to "hide the decline" in temperatures...and to hide the fact that rising CO2 levels in the atmosphere actually do not coincide with temperature rise.. It appears that temperature rise actually facilitates a rise in CO2 levels that follows Behind the rise.... That peculiar fact has the fraudsters scratching their heads and points towards CO2 levels NOT causing their "global warming" at all....

I for one just want people to wake the hell up and put the halt to the fraud "carbon taxes" that will only steal more of our money...

And I would agree with Christian... This planet needs CO2 for it facilitates life itself....