There are elections that are coming up in the criminal and terrorist state of Israel in January, 2013.   It does seem that the criminal Israelis get to vote for psychotic mass murdering leader A or psychotic mass murdering leader B, for the office of Prime Minister.   Either way, I can guarantee that their policies of murder, and terrorism, especially against the Palestinians, will definitely continue.

Today, I came across a shocking article, from my friend, Noor's, website: Snippits And Snappits, at www.snippits-and-slappits.blogspot.com, that I definitely want to share here with my own readers.  It is entitled: "Former Israeli Foreign Minister Admits To Murder And Prostitution In Earlier Years".   I have that article right here for everyone to see for themselves, and I hope you can hold your stomach as long as I have.  I have my own thoughts and comments to follow: 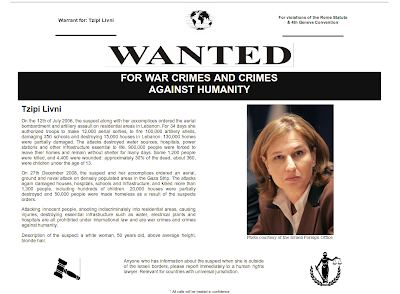 At this point, for the January 2013 elections, Israelis have such great ethical leaders to choose from ~ including a tossup between a psychopathic mass murderer, or a whore/assassin/mass murderer.
.
mathaba.net
December 12, 2012

The former Foreign Minister of the Zionist State of Israel has admitted that she murdered scholars in Europe and was protected by MOSSAD for whom she worked. She also admits to having been a prostitute targeting persons in order to record the sex and use for bribery, manipulation or to obtain secrets and cooperation.

Tzipi Livni, former Israeli foreign minister, revealed that she practiced sex with several Arab personalities while working as an agent of Mossad, “in order to engage in sex scandals, to reveal and extract secret information and political concessions in favor of Israel.”

She even confessed to having committed murder in European countries, whose victims were Arab scholars, adding that the Israeli secret service agency Mossad intervened and saved the day.

In a recent meeting with the British newspaper “The Times”, supported by Israeli and Arab press, Livni said she sees “no disadvantage” in using sex and murder for the sake of Israel “. She said she was “proud” of what she did, indicating that she would again resort to the same practices for Israel.

Confessions of Tzipi Livni came in the aftermath of a notice issued by the Chacham Israeli Ari Shaphat, which authorized Israelis “to use sexual practices with enemies in exchange for important information”, claiming that “Jewish religion tolerates this.”
. 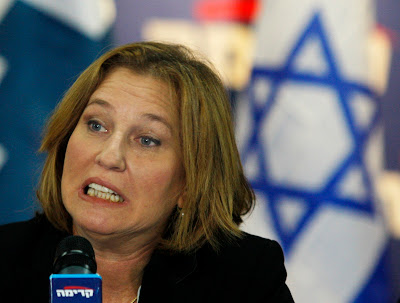 .
Tzipi Livni has held several positions within the Zionist entity. She was at the forefront of the Likud party, and then she left to join Ariel Sharon who then created the Kadima party. She served as foreign minister under Olmert, and was associated with the decisions of the war against Lebanon in 2006 and Gaza in 2008.

After the fall of Olmert, Kadima has chaired the parliamentary elections of 2009 against the Likud, but failed to form a government that came to be led by Netanyahu. She was previously at the level of a Mossad officer, who raked European capitals in search of Palestinian or Arab prey.

Tzipi Livni could soon return to the head of a new party to participate in Israeli elections. It could successfully lead the next Israeli government, and will certainly continue its expansionist policies and war it has conducted during his previous tenure.

Livni is jubilant about her “heroic deeds, through the execution of special operations”, she shamelessly admits to “sexual practices and murder, if it provides information to Israel.” None of the European countries where the murders took place have asked for her arrest or for any further information or investigation.
.

.
This in turn reveals the control the Zionist Entity has upon European governments and authorities. Most private security companies handling European airport security are Israeli, as are various training conducted of police forces against “terrorism”. This in turn allows MOSSAD to execute false flag operations with ease.

Those so-called “Arabs personalities” would have to be pretty drugged up or passed out drunk to bed that ugly wench. If they woke the next morning with their arm around her, they would have chewed their arm off rather than wake her up. Therefore, any one-armed Arabs walking around today should be considered possible suspects.

Keith Johnson
Revolt of the Plebs

NTS Notes:  I could not agree more with both Noor's and Keith Johnson's feelings about this evil creature.

I am surprised that more nations have not charged this criminal for the murders she committed in their nations. But the Jewish control over most governments reigns supreme it seems, and this evil creature may never face justice!

It again shows how truly evil and disgusting these monsters truly are.  They have always used sex as a weapon for the benefit of their evil and twisted sick state of Israel.   We only need to look at how they had their Mossad agent, Monica Lewinsky, have sex with former President William Bligh (Clinton) as the prime example of their actions.


Posted by Northerntruthseeker at 2:37 PM

Another case in point is the seduction of Vanunu by a female Mossad agent. This use of "sex as a weapon" by the Jews is as old as the book of Esther, and it is approved by their rabbis. Such is the modus operandi of this ethnic Mafia that we call "the Jewish people".

FYI: "Canada, which is the Mossad’s western hemisphere base, will rubber stamp anything coming out of Tel Aviv."

And then there were Lewinsky and the latest Esther, Broadwell, the woman who honey potted Petraeus.

Sorry but I find it impossible to believe that this pig ugly woman would ever be used in a honey trap.Just who the hell would be attracted to this creature.